Valley Irrigation has been reinventing the industry for decades, and they’re just getting started 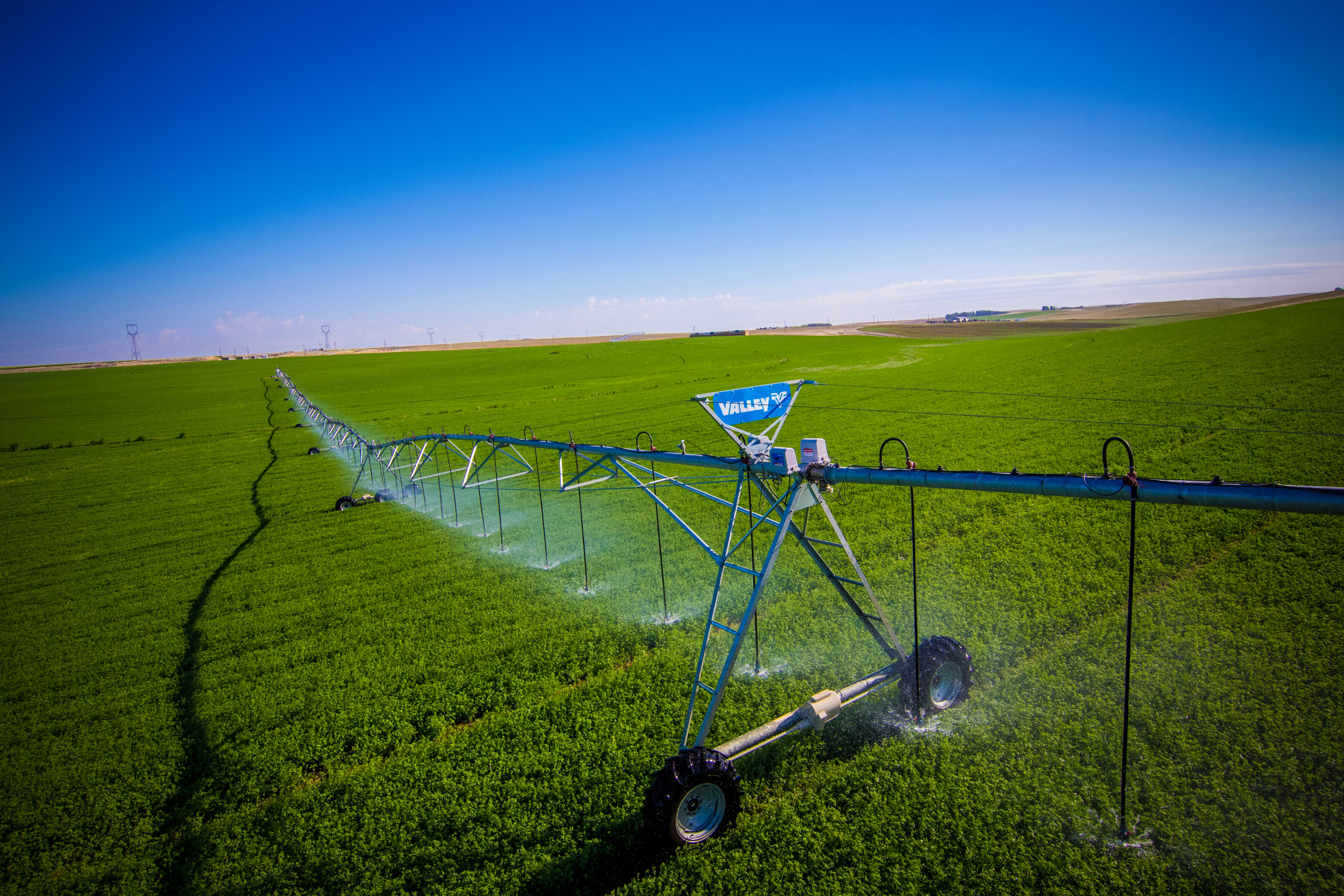 It’s a rare thing to be able to say you created the industry you work in. Valley Irrigation can make that claim and lay claim to still being the best in the business. “When you think centre pivots and overhead irrigation, globally Valley is it,” regional vice president for Asia-Pacific Ben Pevreall told VENTURE. Part of the Valmont group, which also ventured into lighting, utilities, and telecommunications as populations continued to grow and needed infrastructure, Valley Irrigation is focused on feeding and clothing that growing population. “There’s not too many people that can say their ‘why’ statement is as strong as ours,” Pevreall said. By far the largest manufacturer of centre pivots and laterals in the world, Valley irrigates about 10 million hectares of agricultural land. They do it by conserving our most precious resource, water.

Doing more with less is a goal of any business. But it’s never more vital than when it comes to fresh water. Over the next few decades, water will become more and more scarce, so using it efficiently will be paramount. Whilst flood irrigation—a common method for rice and cotton growing—is about 30 to 50% efficient, Pevreall said, Valley methods approach 90% water efficiency. This will prove especially useful as large Asian countries such as China adopt a more Western-style diet with a lot of meat protein consumption, Pevreall said. “Irrigation is a maximizer: It helps growers produce more while using fewer resources. This is evidenced by the powerful statistic that irrigated land accounts for 40% of crop yield while using only 20% of land,” he said. “As we work toward feeding—and clothing—a growing population, irrigation is essential to keep up with demand, while still adhering to sustainability practices. The population will continue to increase, growing the demand for food and the demand for freshwater resources. Irrigation helps with both increasing yields and utilizing less water.” From beginning the centre pivot industry in 1954 to developing the first corner machine to irrigate the corners of fields, to more recent remote management systems and cloud-based solutions, Valley has always made innovation a top priority. It’s helped them gain about half of the global market share with 80 facilities across six continents and 23 countries. That market share puts Valley in a leadership position they take very seriously.

How is it that Valley Irrigation achieves such remarkable efficiency? It starts with the nearly 250,000 irrigation machines Valley has sold. They control the flow and placement of water much more accurately than flood or furrow irrigation can. This was a technology that didn’t exist before Valley brought it to the world. They’ve kept up the advancements since, with growers now able to control their irrigators with a smartphone app. “Growers today have more demands on them than ever before, from time constraints to government regulation,” Pevreall said. “Remote management helps them save time and labor costs by allowing them to monitor and control their irrigation from anywhere in the world, via their smartphone. They can also keep detailed records–for example, of water use–which they can then submit to regulatory agencies.” This saves so much time, Pevreall joked, that he’s heard from a potato grower whose wife is tired of seeing him so much more now that he isn’t out watering all day. Variable rate irrigation (VRI) helps analyse the soil and determine which parts need more water than others. For example, a sandy spot in a field might need more, whilst an area of heavy clay in a low spot requires less watering. “VRI enables growers to water different areas of the same field differently, or avoid areas like paddocks altogether, which conserves energy and water resources,” Pevreall said. Additionally, Valley Scheduling can analyse soil moisture and potential crop stress, then determine when is the right time for growers to irrigate again. It’s not merely about getting the right amount of water to a crop, the timing of the irrigation is also crucial to production. This is especially true of cotton, a crop Valley irrigates around the globe. Cotton actually requires less water than other summer crops such as maize, rice, or soybeans, but the industry has traditionally used flood irrigation and so experiences a lot of evaporation and runoff. “With cotton, its water sensitivity is heightened depending on the growth stage it is in,” Pevreall said. “Water stress can affect everything from the cotton plant’s height to its leaf area and root depth. Of course, terrain and soil variations also can affect the crop’s need for water. But generally, except in cases of severe water deficit, cotton is less affected by water stress in the early stages, from planting to emergence and the stage known as “first square.” After that, the proper amount of water becomes more important to root development, pollination and fruiting–in the flowering and blooming stages.” Using pivot and lateral irrigation, Valley has been able to increase yield whilst decreasing water usage. 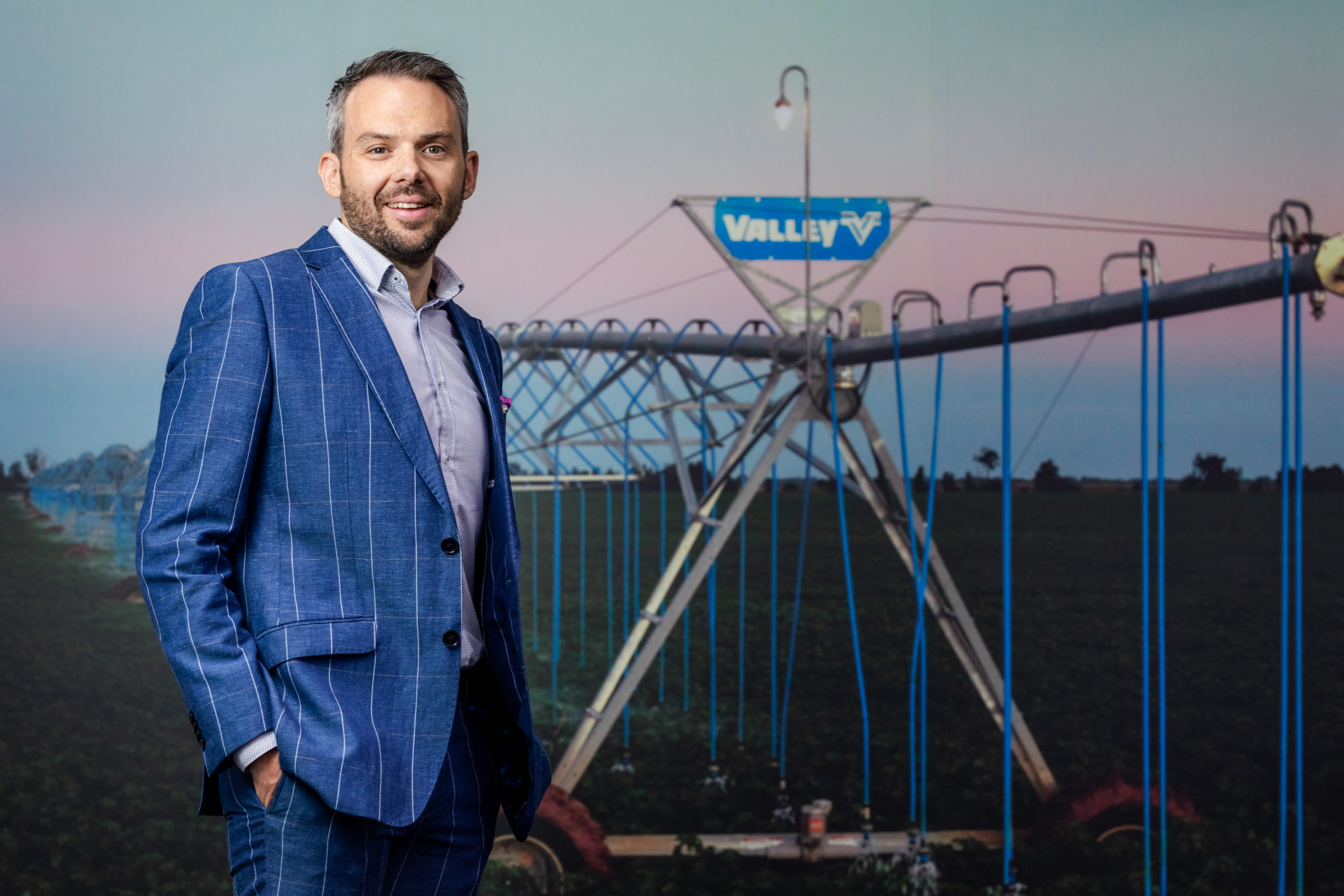 “When I joined the company, I was being interviewed by one of our VPs  and he said, ‘You do realise that you’re a lifer now?’ I said, ‘What do you mean by that?’ He said, ‘You just will not want to leave this company,’” Pevreall related. “The culture of the company, the why statement, the humility, it’s just something I’ve never experienced before.” Over 75 years, he said, Valmont has achieved a huge amount of stability and is completely vertically integrated. That’s allowed Valley to form lasting connections with the growers they sell to. “Our culture is one of family and sustainability. Those two ideas are linked. Generations of our growers have been good stewards of the land and of natural resources, passing on their way of life to their sons and daughters. As growers have done that, they very often pass down a reliance on the Valley brand along with it because they know our solutions help them achieve the efficiency they need.” Even during an historic drought in Australia with one of the lowest cotton planting seasons on record, Valley invested in a state-of-the-art pivot training facility to keep dealers and growers up to speed on trends, competitive information, and technological advances, as well as business and technical seminars to help each other through the difficult time. “I’ve never worked for a business that is so true to our core values,” Pevreall said. That’s what happens when you’re built to last.

Valley® Irrigation proudly manufactures center pivot, corner and linear machines for the agriculture industry, and is the world’s leading creator of precision irrigation equipment. Since pioneering center pivot irrigation in 1954, we’ve helped growers in more than 90 countries conserve water while increasing crop quality and yields. Our extensive line of equipment, including remote control and irrigation monitoring products, efficiently delivers water, crop protectant and fertilizer while reducing energy consumption and runoff. To meet our strict quality control standards, Valley products are manufactured at seven Valmont Irrigation facilities in the United States, Brazil, China, South Africa, Spain and the United Arab Emirates. And we support all of our equipment with a worldwide network of more than 450 dealers. With more than 60 years of experience, we remain committed to providing innovative, precision irrigation solutions that meet the dynamic water and agricultural needs of growers around the world. 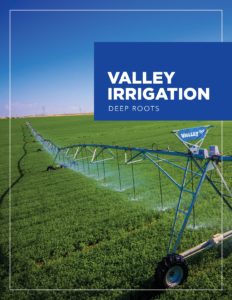