Tiny houses usher in a new way of living 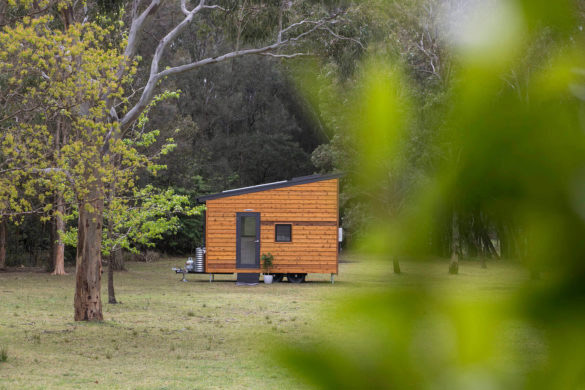 It’s a phenomenon begun in the US and making its way across the world. Whether the motivation is to lead a simpler life, to save money, or to live sustainably off the grid, the tiny house has loads of curb appeal. Some tiny house purveyors are selling a permanent lifestyle, whilst others provide a temporary respite from the rigours of everyday life. Lawmakers are trying to catch up and establish rules for a new variety of domesticity. All in all, these small spaces are making a big impact. 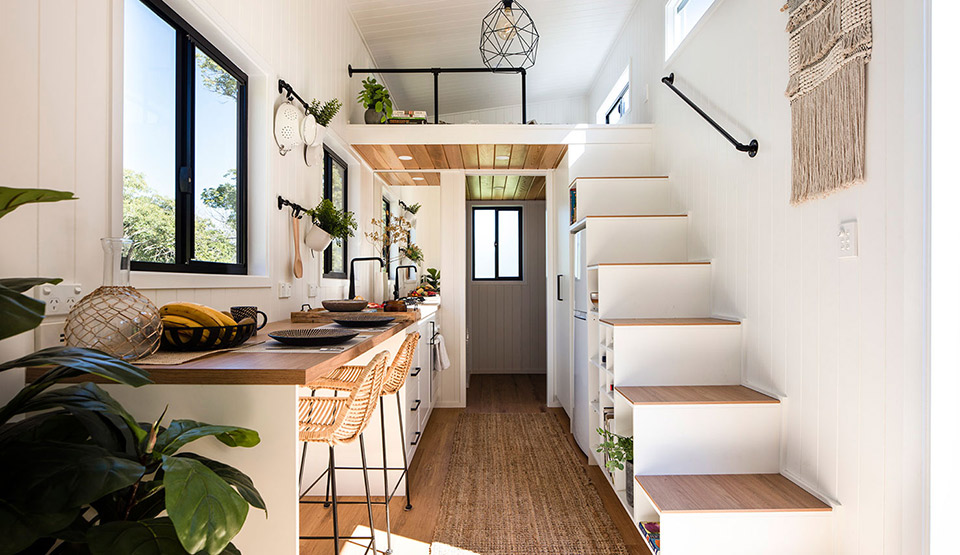 Those buying tiny houses tend to be in one of two groups: young couples — with or without small children — in their first home, and pensioners looking to downsize. The appeal is easy to see. A smaller house costs less and takes a lot less work to clean. Many are mobile, making them a charming alternative to caravans for free spirits.

“A caravan’s going to smell like every old caravan — because mould would have formed in the wall, because a caravan is not good at shedding water,” Fred Schultz, founder of Fred’s Tiny Houses told the ABC. “Whereas a tiny house is good at shedding water because it is using traditional building techniques to not let water get into your wall and grow mould and go off.”

Fred’s won a sustainable development prize from Aim2Flourish, an international organisation which awards Flourish Prizes based on the United Nations’ 17 global goals. Schultz’s homes use only renewable sources for energy and have composting toilets. They can come prefabricated or owners can put them together themselves.

Hangan Tiny Homes and Tiny Homes Australia market to those looking to get closer to nature and live off the grid, as well as those looking for a guest house or extra office space. Aussie Tiny Houses emphasise affordability, with lock up shells from $33,000 and complete turnkey houses from $55,000. Despite a downturn in property prices, purchasing a full-size home can be a struggle for many young people just beginning careers. Aussie Tiny Houses and Designer Eco Tiny Homes offer a variety of standard models plus customisation at no additional cost.

“Housing affordability is a major issue, and we don’t want young people to be forced outside the real estate market and so maybe tiny homes are a way around this,” property valuer Chris Egan told the Canberra Times.

Of course, life in a tiny house means living simply, without many possessions. “If I hadn’t worn or used something in the last six months it went, or if I wanted to buy something then I’d have to get rid of something,” Kathy McLennan told the Canberra Times about her preparations to downsize from a full-size house to her tiny home in Boorowa.

If that’s not for you, but you would like to destress with some much-needed vacation time, you can rent a tiny house instead of going to a busy urban hotel. Tiny Away combines ecotourism and tiny homes with short getaways in the wilderness of Victoria and New South Wales. Stays start as low as $99 per night with a shower, heating, and a kitchen near the Great Otway National Park. Weekly and monthly rates are also available.

In2TheWild has off-grid accommodations in a variety of locations, from wine regions, beach areas, rainforest, and farm stays in VIC and NSW. Their more urban retreats are as little as an hour outside Sydney CBD, and the more secluded options are in places such as the Greater Blue Mountains Heritage Area and Southern Highlands. Can’t seem to break away from checking your mobile every few seconds? In2TheWild advertises experiences where there is no cell reception, so you can force yourself to unwind.

Also operating in VIC and NSW but with sights set on Queensland and the ACT is Unyoked, which projects to top $5 million in annual revenue by next June and aims to have over 300 cabins available by 2022. Advertising “minimum footprint, maximum chill,” Unyoked categorises its offerings by chill, explore, focus, and wellness.

“We created Unyoked as an antidote to you turn up and the first thing you say to your friend is how busy you have been,” Chris Grant, who founded the company with twin brother Cam, told the Sydney Morning Herald. “We wanted to be able to disconnect and feel free. We saw ourselves and others value their time differently and we realised that being hyper connected sort of sucks. We saw this as a systemic problem.”

As a result, Unyoked’s single-room cabins have no telly or WiFi and are out of sight of anything man-made. 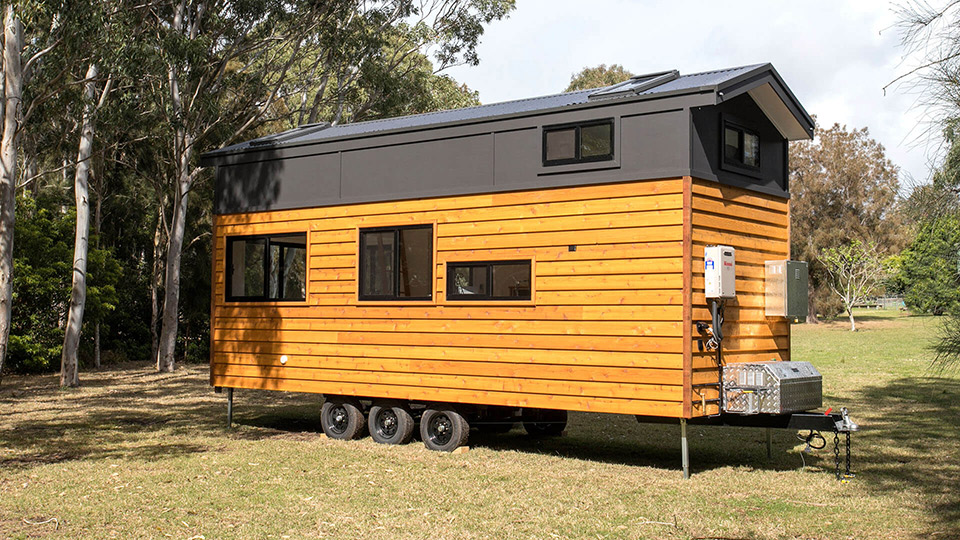 Tiny houses have come on the scene so suddenly, states and municipalities haven’t had much time to codify their use. Add in that some tiny homes have wheels whilst others don’t, and there is a lot of regulatory confusion. Houses with wheels can be no larger than 4.3 metres tall, 2.5 m wide, and 12 m long in order to be safe on roads. In NSW, where McLennan lives, it’s OK to park a wheeled house in a relative’s backyard. Her mobile dwelling is not considered a building, which means it doesn’t have to comply with the national building code. If she wanted to buy a plot of land and park her home there, however, the local council would need to approve.

In VIC, where Schultz lives and serves on a special group at the Municipal Association of Victoria dedicated to tiny houses, rules differ from place to place. Brisbane allows full-time caravan living, whilst other municipalities limit parking to six weeks. “It’s considered camping, technically, on your own land, and you’re only allowed to do that for a limited period of time in a caravan,” Schultz told the ABC. Schultz is working with the Tiny Homes Sweet Home project to provide temporary accommodations for homeless people in Castlemaine, VIC.

Bunnings sells prefabricated flatpack homes starting at $65,000 for a two-bedroom and is doing a brisk business in New Zealand, but despite selling more than 50 tiny houses, the chain has no plans to offer them in its Australia stores because of legal uncertainty.

Tiny Non-Profit is devoted to making tiny houses a common and legal form of dwelling. The group lobbies local councils to include tiny homes in their development schemes. With the homes legally regulated, banks and insurers can value them and provide financing for buyers.

“I think with the passion that exists around tiny houses,” Katherine Leong of Tiny Non-Profit told the ABC, “I find it very hard to believe that we wouldn’t see more tiny houses.”