Developing the digital mine

In their quest to provide “all the answers underground,” RUC Cementation Mining is shaping the industry’s future through the application of novel technologies to the sector’s most pressing concerns, namely productivity, efficiency, and safety.

A wholly owned subsidiary of the Murray & Roberts group of companies, RUC specialises in global underground mining from its headquarters in Perth. As a full service hard rock mining contractor, they are involved in every aspect of the project life cycle, providing feasibility studies, specialist engineering, vertical and decline shaft construction, mine development, specialist mining services such as raise boring and grouting, and contract mining.

“We engaged MineTech to implement the vehicle tracking system, and we had the task to effectively double mine output on that project, and we managed to do that in a little under two months. We improved our trucking efficiency significantly by understanding in advance the location of all of our assets so that we could manage an obstruction free, free flowing underground haulage route.” The result: improved productivity, accurate tracking, and vastly improved driver visibility and safety.

“I've been in the business 40-odd years and there are certain things that you try to do to improve the way that the industry as a whole works,” he said. “I've always been interested in engaging new ideas and bringing them into practice. Being a private company and having a straightforward schedule of rates contract gave us the flexibility, with the owners’ permission, to take whatever risks we wanted to take and make the changes we wanted to make without having to go through lengthy approval processes with both internal and external parties. We decided it was what we were going to do and went and did it.”

Typical underground mining operations are productive for about 18 out of 24 hours a day. RUC’s automation efforts were initially targeted to add more time back into that window. “There's an inherent 25% inefficiency in the typical underground mine due to shift changes, blasting, safety briefing prior to shifts, and all those kinds of things, and you have planned unproductive periods and then you have unplanned periods waiting for blasts to clear or perhaps dealing with vehicle breakdowns on the main haulage routes,” he said. Remotely operating multiple loaders from the surface allows for 24-hour production without labor shift delays. The ROI on this aspect took less than four months.

“Over the journey we delivered 200,000 tonnes extra over 15 months on one project,” he added. The addition of air quality management systems also boosted worker safety and productivity, significantly slashing waiting time for atmosphere analysis. “By linking our air quality management system with seven fixed gas detectors throughout the mine with the live feed to the surface we found that we could safely get back to work 14 minutes after blasting. Typically that might have taken an hour to two hours.”

The next part of their digitisation strategy revolves around getting real-time performance data from their assets. “The overriding priority on this project is to predict when equipment is operating out of its normal range, and then to try to prevent unplanned breakdowns through reliability engineering based on known data.”

RUC’s technology partnerships are designed to provide mutual benefits, such as their work with Remote Control Technologies. “Often these companies have great products but they can't test them because they don't have anywhere to test them,” he said, noting that RUC gives them the opportunities to fully test RCT’s cutting edge tech.

”In return we get the first look at new technology, and get a discount if we adopt it. That's one area where we’re using our supply chain partners. The other area is where we take a collaborative approach to developing new software, new databases, and new analytics. It's a win-win for everyone.”

Other partnerships include agreements with Rockwell Automation. “We are both a customer and supplier so we actually prepare equipment for Rockwell to commission to other suppliers. We have a relationship with Dell to provide us with hardware, and Remote Control Technologies has been a significant player as well,” he said.

A partial acquisition with automation startup Insig Technologies is strengthening their already formidable in-house capabilities. “Having that ability to understand what we're being offered, what’s going to work and what's not, is a real advantage. Apart from the actual development and completion of projects, Insig’s technology is fundamental to our remote operations, our quality management system, remote drill operation, and the real-time data capture from our heavy equipment,” he stressed.

“Because it's an in-house company where we have a significant shareholding, we provide the projects and the field environment and they do the smarts behind it. We can turn a project from concept to actual operation in the field in three months.”

Self-reliance is a company hallmark. Rather than depend on OEMs, RUC custom manufactures all of its own raise drill rigs to meet some of the world’s most challenging underground mining projects. As the third largest contractor in Indonesia’s huge Grasberg gold and silver mine, they make a significant contribution to the underground production which will ultimately produce 230,000 tonnes of ore each day. In the last 12 months, RUC has delivered a 10% improvement in unit costs across the board in their Freeport contracts.

RUC is currently a joint venture partner contracting to Oyu Tolgoi to develop their mine in Mongolia’s Gobi desert. “We are simultaneously developing two of the world's largest shafts ever sunk. We're doing one shaft around 1,250 metres deep at 11 meters finished diameter, and at the same time we're doing another shaft which will also be around 1,250 M at 10 metres in diameter. That’s the approximate length of 6.75 AFL fields, by the way. The precision effort is breathtaking: RUC drilled a ventilation raise with a final deviation of just 20 mm over a 1,300 m raise – a variation of less than 0.002%.

RUC’s commitment to excellence extends to nurturing the indigenous workers they depend on for their success. Ninety-two percent of their Indonesian workforce are indigenous peoples, and in Mongolia that figure rises to 95%. “These are people who have very limited education and we've taken them on board and trained them up to give them contributory roles within our organisation. We're very proud of our engagement with indigenous workforces.” From lifting precious resources from deep within the planet to lifting its people through new opportunities, RUC truly does provide “all the answers underground.”

RUC Mining – all the answers underground.

Since 1991 we’ve been on a mission to bring certainty to underground mining—and today we’re proud to say we can provide all the answers underground. That’s a big claim, but one that we can back up with some big facts that say it all.

Today we operate globally, using our team of highly experienced experts and extensive fleet of modern equipment to tackle the most complex and challenging jobs for the world’s biggest names in mining. In addition to being world leaders in raise drilling, we offer:

So if reducing complexity, eliminating delay costs and increasing productivity is the question, RUC Mining is your answer. 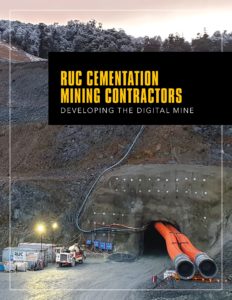