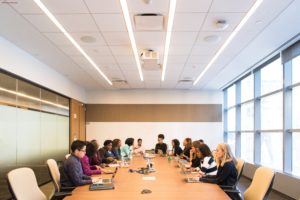 “I wish I had more meetings”, said no one, ever. The average executive spends 23 hours per week in meetings. Yet few obsess over how to reduce this time and ensure it is time well spent. With a bit of planning, some creativity, and quirkiness, some of the world’s most successful leaders have reduced time spent in meetings by over 50% and infinitely improved the time they do still spend in meetings. This is how they have done that.

They don’t accept meetings without a clear agenda

At 1-800-GOT-JUNK, CEO Brian Scudamore has a strict rule for any meeting that goes in his diary called POA. POA stands for Purpose, Outcome, and Agenda.

“For every meeting, someone has to communicate the the purpose, the outcome, and a brief agenda,” Scudamore told to me on an interview on the How I Work podcast. “It doesn’t matter if it’s a 10-minute meeting or a one-hour meeting. If there’s no POA, it’s no-go-A.”

Brian’s assistant ensures this rule gets adhered to. His assistant asks anyone that wants to meet with Brian what their POA is. If they can’t answer the question, the meeting won’t go in the diary.

They never default to 60-minute meetings

The average leaders’ diary is filled with blocks of 30- and 60-minute meetings, making the average diary look like a game of Tetris. But for Scudamore, in addition to the POA rule, being deliberate about how much time any given meeting will need is critical. “I’d rather a 22-minute meeting than a 45-minute meeting,” Scudamore explains.

As such, Scudamore and his assistant never default to 30- or 60-minute meetings, and indeed, most of Scudamore’s meetings are for an odd number of minutes. And where a POA can be resolved quickly, Scudamore is known for setting meetings that will last for less than 10 minutes.

Meetings often litter calendars in a scattergun pattern. But what impact does this have on productivity? Researchers from Ohio State University found that when people have a meeting coming up within an hour or two, the time in between is used much less productively. When people had a meeting coming up, they got 22% less work done in the time before the meeting started compared to if they didn’t have a meeting approaching.

For Wharton Professor and best-selling author Adam Grant, this research reinforced how he approached his own meeting schedule.

“On a teaching day, I’ll hold all my office hours meetings back to back,” said Grant. “I learned that I needed a little buffer of five minutes or so between each meeting just to catch up on email or in case a meeting ran long, but then I’d have another day with no meetings at all where I could really focus and be productive. This research reinforced that for me.”

They create simple structures for success

For Ella Bache CEO Pippa Hallas, having a structure for meetings is key to getting the most out of them. Whenever someone is presenting in a meeting or a problem is being discussed, she uses a framework called 1-3-1.

“We ask for one problem, three options, and one recommendation,” explains Hallas. “We’re forcing ourselves through a framework to have solution-based conversations.”

To reinforce the structure, Hallas writes up one, three, one onto a whiteboard for all her meetings. “I do it to remind everyone how to frame things. That’s also how I set out meeting agendas. It forces the preparation and the thinking time before we actually get to the meeting.”

They try to avoid meetings where possible

Atlassian’s head of R&D, Dom Price, loathes meetings. And a year ago, he realised he was drowning in them. So he took action.

“I deleted every single meeting out of my calendar and it went with a note that said one of three options,” Price describes. “Option one was to reinvite me but tell me what my role and responsibilities are for the meeting. Option two was to still hold the meeting but invite someone else in my team to do it. And option three is that the meeting probably shouldn’t exist.”

As a result of deleting all meetings, many of them never returned. “I now have less meetings and the ones I have I find are really focused on something specific and I believe that my contribution in those meetings has now increased.”

So rather than get frustrated over the flood of meetings in your calendar, take action to win back time in your diary or to actually ensure your meetings are time well spent.

Dr Amantha Imber is the Founder of Inventium, Australia’s leading innovation consultancy and the host of How I Work, a podcast about the habits and rituals of the world’s most successful innovators.