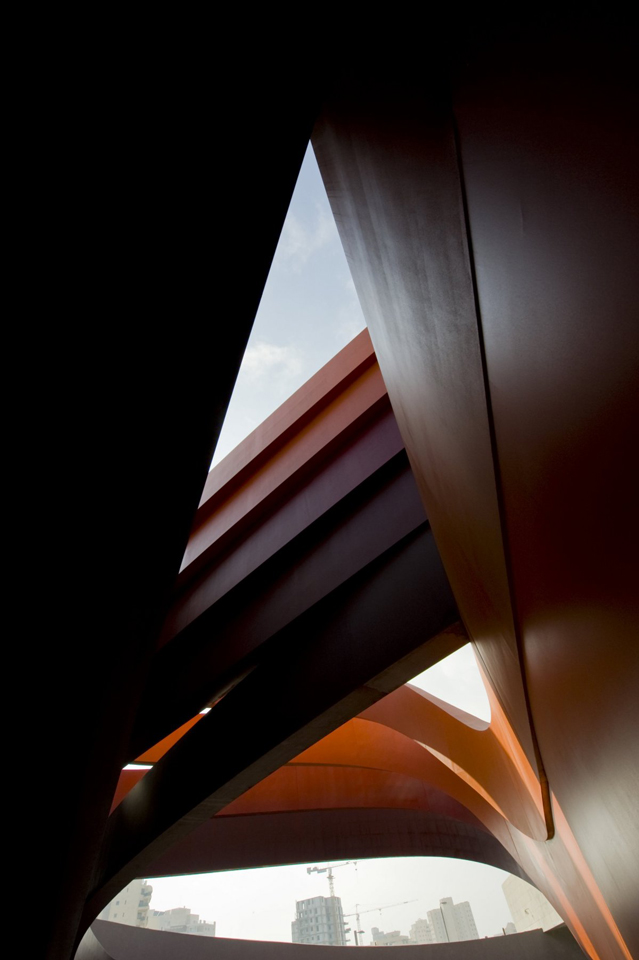 10 museums around the world with eye-catching design

For the culture issue, VENTURE takes you on a tour of some of the world’s most striking museums. While the works of art inside are timeless and priceless, we’re focusing on the most eye-catching exterior designs out there and celebrating buildings that are works of art in and of themselves. 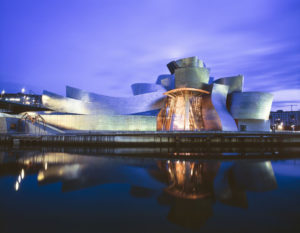 The work of famed American architect Frank Gehry, the museum lets visitors know right away they’re in for a unique experience. A broad stairway leads down from the city center to the museum along the banks of the Nervion River, allowing the Guggenheim to be impressive yet not overshadow and dominate the historic buildings around it. The museum building resembles a metallic sculpture, culminating in a large flower-shaped skylight over the atrium. The exterior is covered by 33,000 small pieces of titanium, allowing the building to vary in color depending on the amount of sunlight reflecting off it. Gehry used software initially conceived for the aerospace industry because of the mathematical complexity of his design. 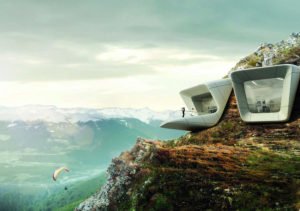 There are actually six museums spread through the Dolomites of Northern Italy, all examining humanity’s relationship with mountains. Reinhold Messner, the first person to make a solo ascent of Mt. Everest and the first person to climb all 14 mountains that top 8,000 metres, conceived the project. The most recent building, atop the Kronplatz mountain at an elevation of 2,275 metres, was designed by Pritzker-prize winner Zaha Hadid and opened in 2015. Called MMM Corones, the museum focusses on traditional mountaineering, and as such the building allows the mountains to do all the talking. The concrete structure is mostly underground, with an entrance peeking out from the mountainside and a spectacular viewing platform jutting out to take in the majesty of the surroundings. 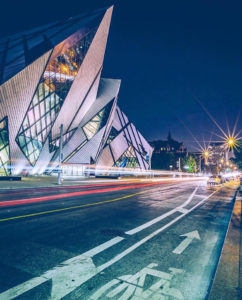 Opened in 2017 as a 30-year agreement between Abu Dhabi and France, the museum houses works on loan from its Paris counterpart as well as works acquired by the city government. Jean Nouvel designed the geometric dome to resemble a date palm frond in an oasis, allowing sunlight to dapple through openings. Visitors arrive to Saadiyat Island by land or sea, and the museum’s architecture creates a micro-climate shielding against the desert heat. Nouvel describes it as “a welcoming world serenely combining light and shadow, reflection and calm. It wishes to belong to a country, to its history, to its geography without becoming a flat translation. It also aims to emphasise the fascination generated by rare encounters.” 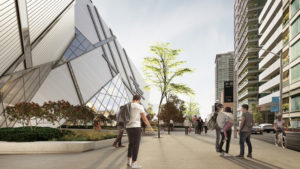 At first glance, it might appear some catastrophic earthquake dropped one building on another and nobody ever cleaned it up. The “Crystal,” added in 2007, is a glass and aluminium structure built at an angle to the original building, a Romanesque Revival that opened in 1914. Daniel Libeskind designed the Crystal, which provides a stark contrast to the austere, rectilinear original structure by featuring sharp angles and the appearance of a skyscraper that’s been tilted 45 degrees. The Crystal opened with controversy, as some critics proclaimed it an eyesore while others lauded the bold design. 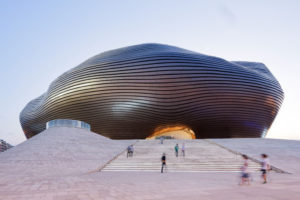 Chinese architecture firm MAD drew inspiration from the surrounding Gobi Desert and the work of Buckminster Fuller. The convex exterior uses polished aluminium to protect against the cold winters and sand storms that characterise the area, located in Inner Mongolia. The interior is a bright, cavernous space that calls to mind a canyon carved out by millions of years of erosion. An oculus sits on the southern facade, allowing in enough light to support a winter garden and serve as a gathering space. 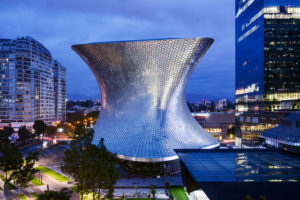 The Soumaya Museum contains art going back 3,000 years, but the design of its new building is thoroughly modern. It might look like a simple vessel being spun on a potter’s wheel, but its skin of 16,000 hexagonal aluminium tiles ensures it stands out in a metropolis that blends old and new as a habit. The museum, named after the late wife of founder and former richest man in the world Carlos Slim, was designed by Fernando Romero, who worked under Louvre Abu Dhabi architect Jean Nouvel and is married to one of Slim’s daughters. 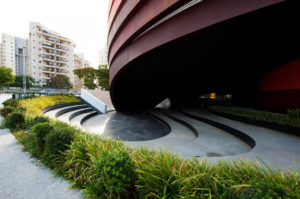 The city of Holon asked architect Ron Arad to create an iconic building to educate visitors on the world of design. They chose wisely. Red ribbons of Corten steel wind their way in and out of the building, supporting it structurally and making for a stunning visual. In some spots the steel bands run parallel to each other, while in others they shoot off to do their own thing. At all times, they serve as a visual marker for where in the museum one is, and they echo the colours of the desert around them so visitors can’t forget what country they’re in, either.

A 91-year-old I.M. Pei spent six months researching Islamic architecture throughout the world in preparation for designing this 45,000-square-metre museum, which sits on an artificial peninsula overlooking Doha Bay. The light fountain at Cairo’s ninth-century Ibn Tulun Mosque provided the most direct inspiration for Pei, who chose a bright limestone for the building to enhance light play on the geometric layers of the exterior. Geometric patterns throughout the interior call to mind buildings throughout the Islamic world, but with Pei’s customary modern twist. A bridge connects the museum to a large park that acts as an oasis in the desert landscape. 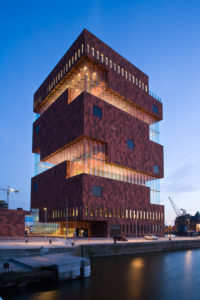 The Art Deco design of Neutelings Riedijk Architects recalls the 19th-century warehouses that used to dominate the shipping district along the Scheldt River where the museum opened in 2011. Red sandstone and curved glass alternate on the exterior, allowing light in and giving the structure a post-modern aesthetic. More than 3,000 hands adorn the facade, metaphorically holding the building up and alluding to Antwerpse handjes, the hand-shaped biscuits for which Antwerp is famous. Inside, the same number of medallions are embossed into the floor, and a 16-word poem in Flemish — wherein each word can be taken as the beginning or end of the poem — praises the city, its water, its people, and its heritage. 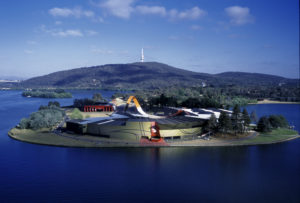 Occupying 11 hectares beside Lake Burley Griffin on Acton Peninsula, Howard Raggatt’s design is meant to symbolise a series of ropes representing the different cultures that formed Australia all meeting in a knot at the centre. “We liked to think that the story of Australia was not one, but many tangled together,” the architects stated. “Not an authorized version but a puzzling confluence; not merely the resolution of difference but its wholehearted embrace.” Each “rope” is a different colour, making the exterior a vibrant palette that continues inside. One ribbon unfurls into a loop that ends in a footpath symbolically extending toward Uluru. 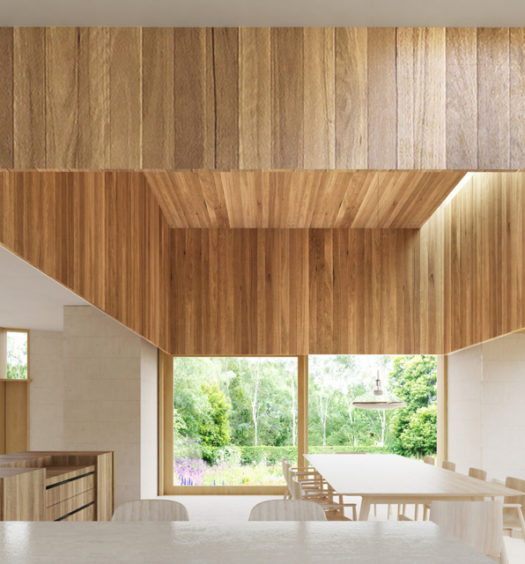 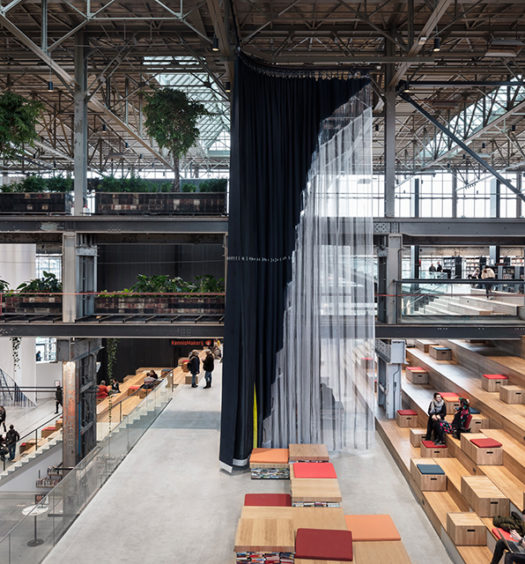