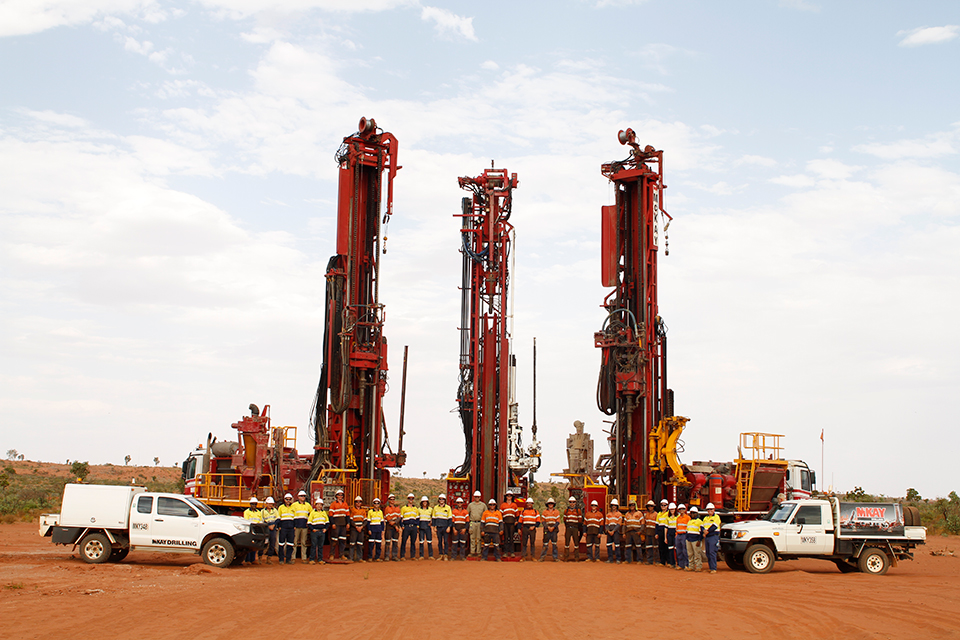 Name a blue chip mineral exploration and production outfit who’s set up shop out West in the past 30 years — BHP Billiton, Rio Tinto, FMG, Newcrest, and others — and you’ll find they share a distinctive commonality. They’ve turned to McKay Drilling for their innovative approach to technology development.

Established in 1990 by Mark McKay, the award-winning operation is pushing the boundaries of what’s possible in reverse circulation and diamond drilling. With an extensive presence throughout Australia, the firm is supported by a young, dynamic management team known for taking bold steps to improve precision, efficiency, and safety in greenfields, near mine brownfields, and in pit drilling applications.

McKay’s work has come a long way from those first days in the ’90s, “When Mark started we were servicing a lot of the smaller junior miners doing real greenfields in remote areas, drilling out of the back of caravans, and swagging it in the bush, so a lot has changed,” company GM Aaron Earl told VENTURE. Earl, late of Boart Longyear, saw the inroads McKay was making in 2014 and joined the team. It was a bold, prescient move. “To give you an idea of how innovative Mark is, in the ’90s he was the first person to set up a hands free rod handling system.”

Today, the company operates a state of the art reverse circulation fleet comprised of high capacity Schramm T685 drill rigs, as well as a pair of remote controlled T685i rigs (I-rigs) that let drillers operate up to 8 metres away from the rig — a tremendous step forward in mine site safety.  But to fully grasp the impact McKay is having on Australia’s E&P sector, let’s take a few steps back to see how brash innovation in a downturn drove the firm to new heights of growth and achievement. 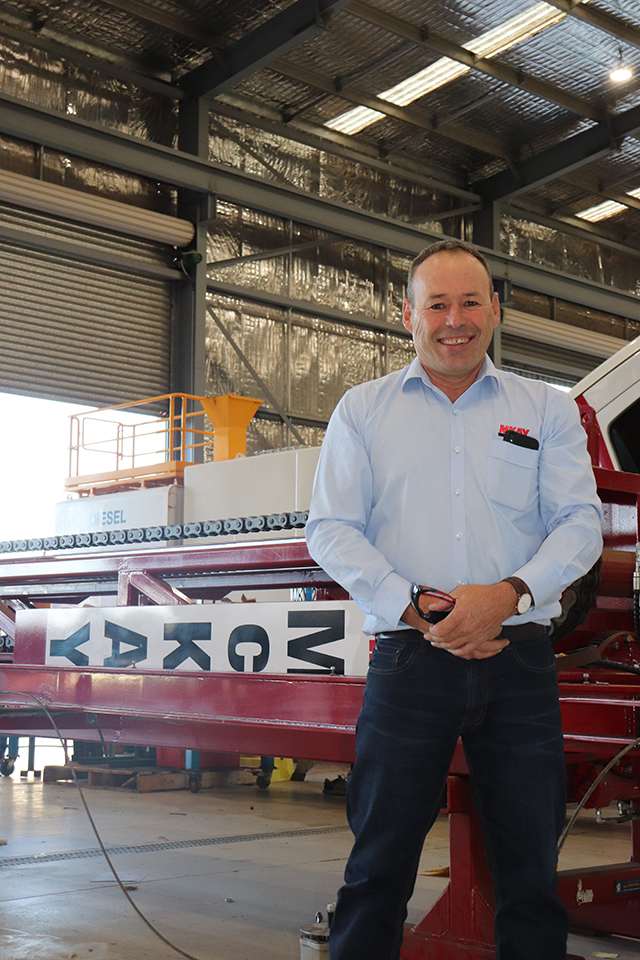 “If we go back to 2013-2014, the market was quite depressed. Commodity prices were down, and not many contracting or drilling companies were investing in new technologies and new equipment. Many companies retracted to maintaining the gear that they had,” Earl recalled.

“Mark has a history of being very innovative and an ambassador for engineering solutions and equipment related upgrades. We took a calculated gamble to spend $30 million on capital equipment and investing in new technology to introduce to the market.” At the time of that call, the company was making revenues of just $13 million.

“Investing $30 million into a business that's only turning $13 million is a pretty ballsy move,” Earl said. In the five years since making that commitment, McKay’s revenue has skyrocketed to an excess of $50 million. “It's pretty good,” he chuckled. “It was all opportunistic; no one was spending money on new equipment and technology at the time, and Mark took a big risk quite personally and with the business itself to invest in the new technology. It has certainly achieved what we wanted it to achieve.”

The year 2014 also saw the firm diversify offerings to expand into diamond drilling. “We purchased some new rigs from America and brought them to Australia, built them in-house and upgraded the operating systems to reflect what we wanted out of them,” he revealed.

McKay’s diamond drilling rig fleet consists of some of the industry’s most leading-edge equipment, including hands-free remote-control rod handling and monitoring technology. Their LF350 rig is the first of its kind in the nation, and features a retraction system that removes all the hydraulic cylinders from the mast assembly, which represents another huge leap forward in worker safety.

“A lot of the innovation in technology and the operating systems of our rigs is developed in conjunction with our drillers and the teams on the ground that will be operating the equipment. If you look at the way people innovate and develop equipment, historically it's been a product that's been developed for a market need, whereas we engaged our team on the ground to get involved in developing system solutions that are beneficial for them and for the operational functionality of these machines, as well as for meeting our clients’ needs,” Earl explained. 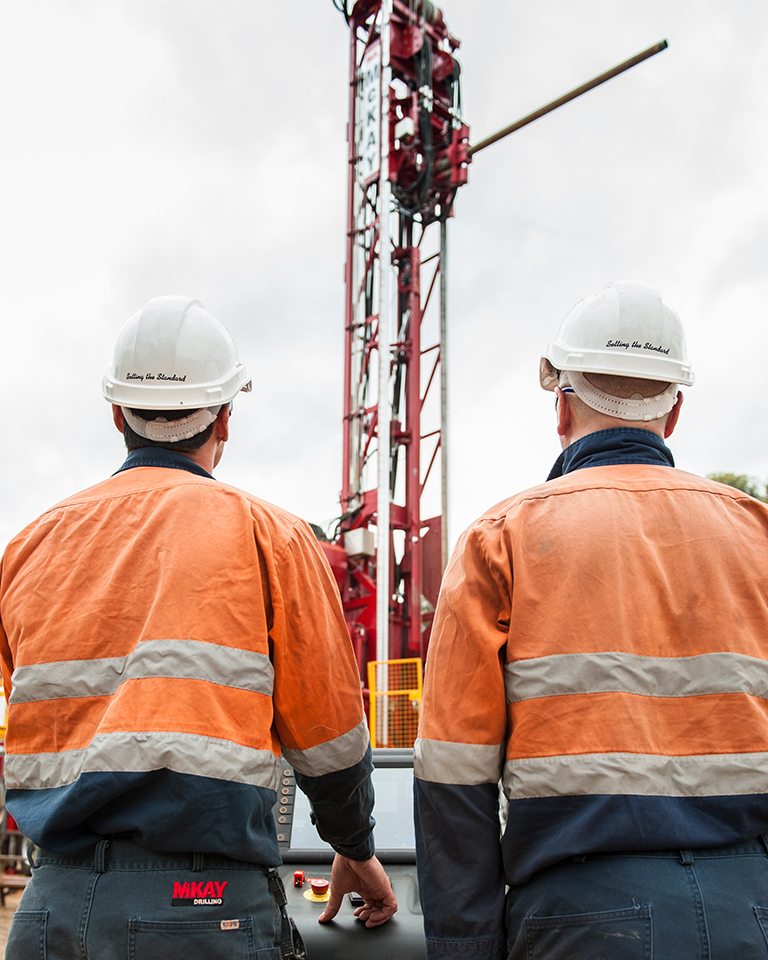 Buy-in from the operating teams is crucial. “If you don't have the investment from your team on the ground, you can get pushed back. We got the team involved and got more buy-in as a result.”

McKay is now exploring the potential of fully autonomous equipment. Typically, mining companies pushed contractors to adopt automated systems. In contrast, the drive toward automation has always come from inside McKay.

“We see great value in automating systems and removing operators from risk. If we can automate systems and processes, we eliminate any human factors or incidents that may create equipment damage and downtime. But our main focus is always employee and rig safety.”

Creating a safe work environment for all people, equipment, and the environment is a company cornerstone. “That's the whole reason why we innovate in the first place,” he stressed. “We’ve still got work to do, like finding ways to remove our operators from dangerous zones of the rig, whether it's remote operation like we have with the I-rigs, or getting to the stage where we can have a centralised control centre in an office where the drillers are monitoring and operating the rigs remotely and aren’t exposed to moving parts and equipment, or to extreme weather conditions and thermal heat up in the Pilbara, getting them out of 50 degree heat and removing those risks.”

Not surprisingly, McKay’s culture is one of deep caring and familial connection. “We are in a niche where we are large enough and have enough support in the business to cater for blue chip clients, but we are small enough to remain very nimble and to maintain a real personal touch with our workforce and teams on the ground … Mark visits the field and the workers and makes himself available, visiting the rigs, and socialising over a beer at the end of the day.

“Our people aren’t here working for a corporation, they’re working for Mark McKay and his family and everything he’s put on the line for the past 30 years. That’s the culture that we drive within our business. It works well, and it makes us stand out from other companies.”

McKay Drilling is a Western Australia-based drilling company specialising in all areas of Reverse Circulation, Hydro and Diamond Drilling. The company strives to deliver a high-end drilling service to the exploration and mining industries.

Established in 1990, McKay Drilling has extensive regional experience and has operated in most states and territories throughout Australia.

In partnership with a strong focus on continuous improvement the company holds four ISO standards, AS/NZS ISO 9001 — Quality, OHSAS 18001 — Safety, AS/NZS ISO 14001 — Environment & ISO 55001 — Asset Management. These ISO certifications demonstrate the robust processes McKay Drilling have in place which capture the skills and knowledge of our people, and help us to continue to develop industry leading standards across all aspects of our business.

McKay Drilling prides itself on having the best people, with a focus on continual growth and development in innovation and technology, while upholding a safe work environment for all people, equipment and the environment. 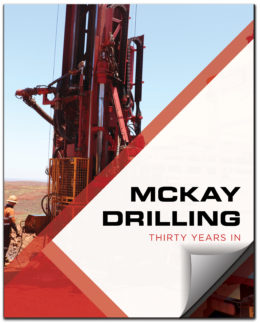