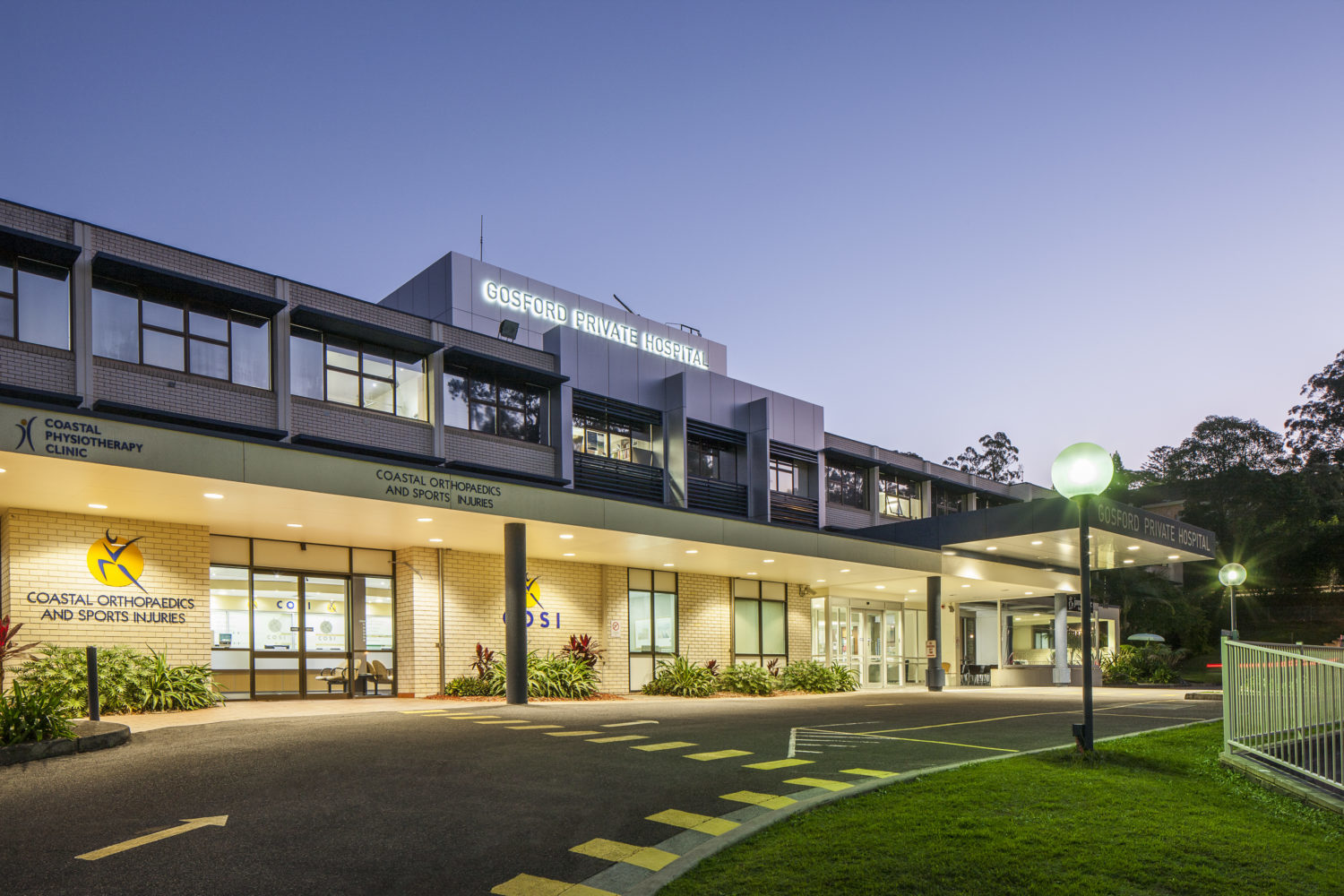 The largest private hospital in the Central Coast recently completed a multi-million dollar redevelopment project, and has more improvements and innovations scheduled. 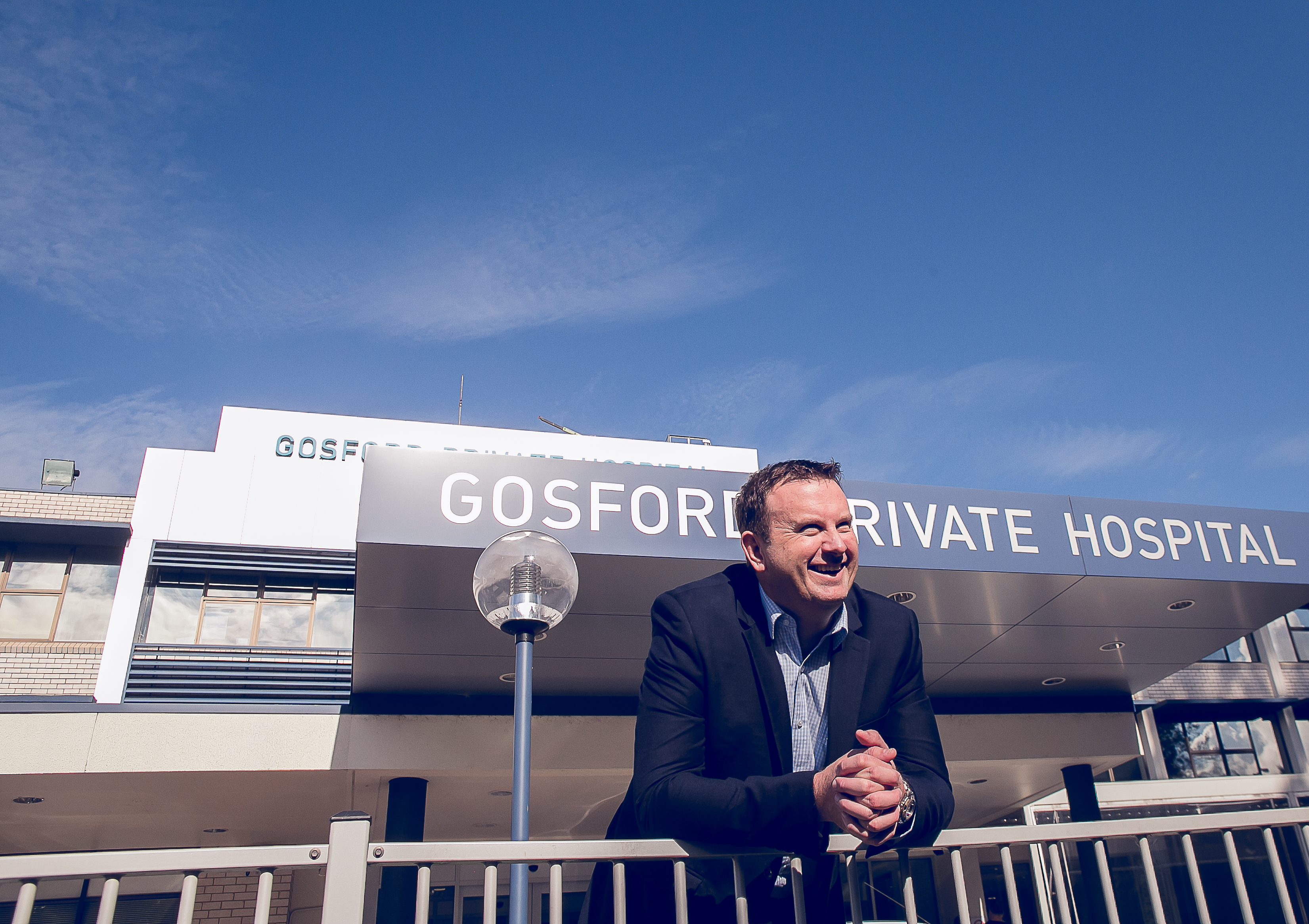 The hospital was founded in 1980 by a shareholder group comprised of doctors who were interested in servicing the healthcare community in the region. Over the years, a few different groups have owned and refurbished the hospital, but Healthe Care Australia, the owners since 2006, have made huge investments and put a lot of energy into transforming Gosford Private Hospital into the building and the organisation it is today.

The numbers and statistics alone are impressive: Gosford is a 143-bed inpatient facility, with 28 day-only beds. Over 500 staff serve these beds as well as 9 operating theatres, 8 Level 2 intensive-care beds, 6 coronary beds and 2 angiography suites. These facilities perform over 14,000 operations, more than 52,000 patient days per annum, with an impressive turnover of
$75 million.

For Matt Kelly, CEO of Gosford Private, money is important, but not the priority when it comes to patient and visitor care.

“Often when a visitor or patient comments on his or her experience, it’s always about the feel of the hospital: the kind, helpful staff and a noticeably strong culture. This is why the staff and I do what we do.”

Matt has been with the hospital for over three years and the CEO since December 2014. He has over 20 years experience in healthcare since he started as a nurse working throughout Newcastle, Sydney, and the UK in critical care departments before moving into management roles. 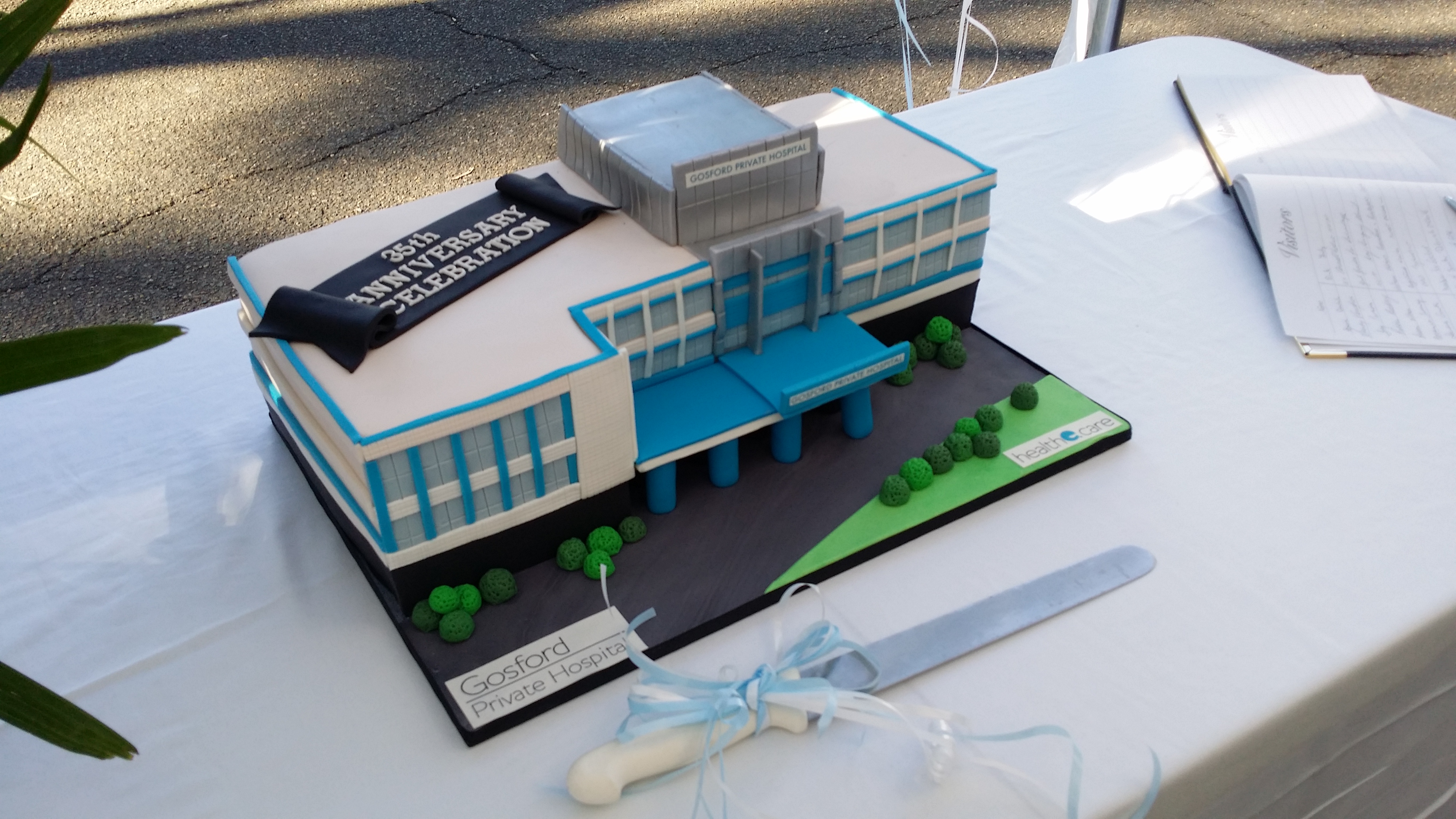 Healthcare Excellence
There’s a lot working in Gosford Private’s favour at the moment, and a lot of time, effort, and money has gone into the organisation getting to its current industry-leading position on the Central Coast. The hospital is able to provide almost every style of healthcare, in part because of the facilities Healthe Care Australia has worked so hard to maintain and improve.

The hospital also has an ear to the ground in the healthcare community to learn what needs to be expanded and added from local doctors. To this end, relationships with the Local Health District and Primary Health Network are both important and beneficial for each side. These relationships have led to partnerships with surrounding public hospitals, giving Gosford Private the opportunity to take overflow patients from these other hospitals in times of need.

There are some disadvantages the hospital deals with too: it’s hemmed in by large metropolitan areas, and local private hospitals are no longer competitors. But instead of seeing these as ways to fail, Matt and the management team with Gosford Private Hospital and Healthe Care Australia see these as challenges that will lead to ways to succeed.

Reaching a Milestone
The management team under Healthe Care Australia was cited by Matt as one of the many reasons Gosford Private has been able to continue its success in the last 10 years.

“There have been multiple owners over this hospital’s 35-year history but in the last 10 years, keeping the executive management team stable has been the strongest driver to maintain relationships and keep key stakeholders like surgeons and physicians involved with Gosford Private,” he said.

When doctors can see the same faces at the front desk or nursing stations, a sense of comfort and a heightened level of corporate memory come into play, Matt also shared with us. And with over 200 doctors in 19 different specialties at the hospital, maintaining a comfortable, welcoming environment for the people who are providing the patient care has been a priority.

This broad service portfolio complimented by the continually improving Gosford Private facility allows the organisation the ability to not have to focus on one specific medical field or service to maintain financial momentum.

When asked what the hospital will have to do to be successful in its next 35 years, Matt had a very clear vision for the future.

“I think a big part of our success will be maintaining our strong management team and looking forward to grow our market share,” he said. “We have a vision of where we want to be in 2020, and that includes growing our critical care, neurosurgical and cardiothoracic departments, and building an emergency department, something that no other Central Coast private hospital has.”

In celebration of its 35th anniversary, Gosford Private hosted a week-long celebration recognising its past with a photo gallery and celebrating staff that have been a part of the hospital since it opened. Its ceremony on 15 July included local dignitaries, shareholders, and 100 guests. 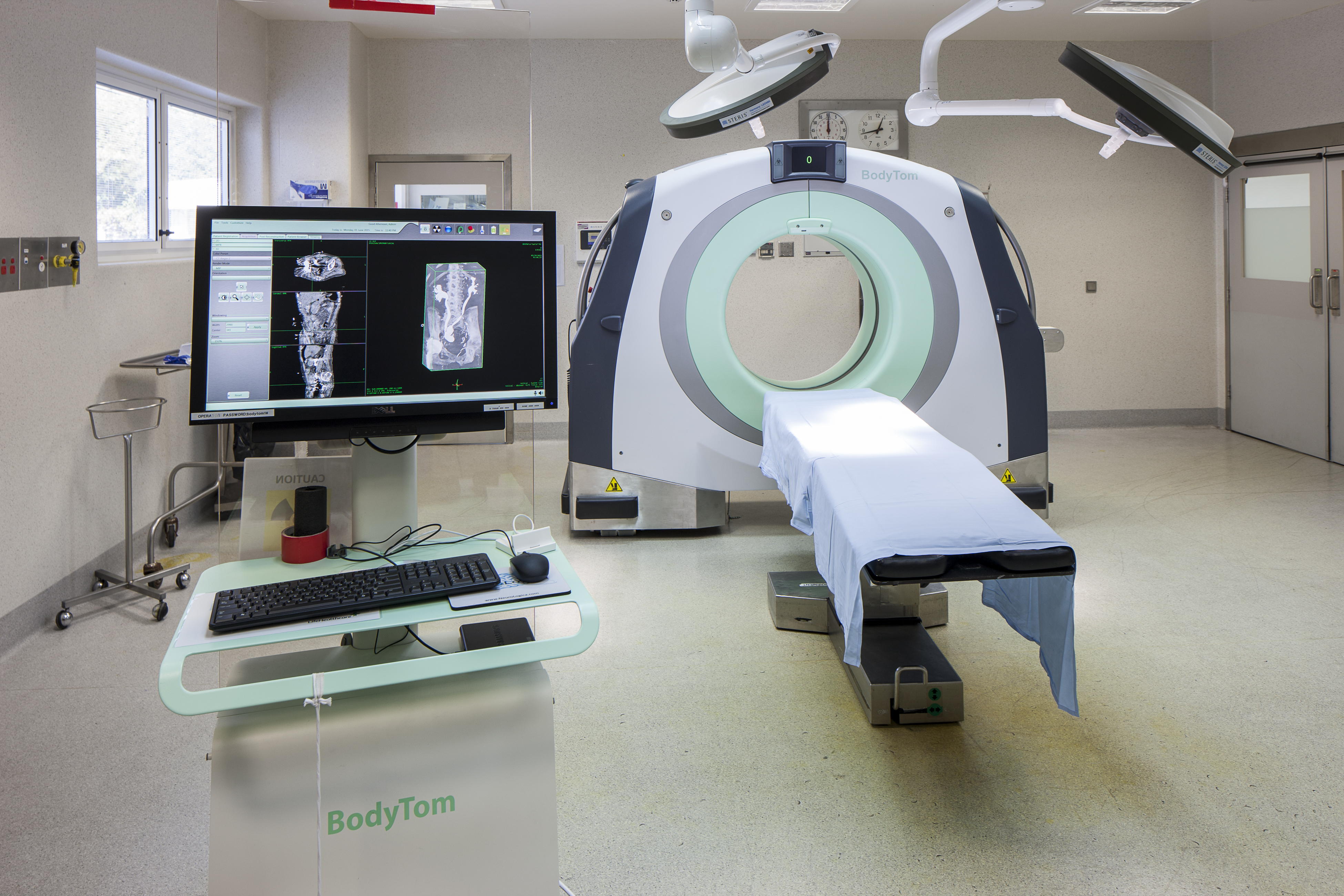 Recent Improvements
and Additions
Gosford Private, with Redeye Constructions, recently concluded a multi-million dollar redevelopment project, which has outfitted the location in a slew of new technology and facilities.

Among these are two angiography suites which hit their third year in use this year, as well as a cardiothoracic service, which has now been in use for just over a year. The biggest area of growth Gosford Private Hospital has seen in its last five years has been the number of cases its angiography suite attend to—approximately 2,000 cases a year now.

When Gosford Private expanded its angiography suite with two new facilities, branded as the Gosford Heart Centre, the hospital decided to fully outfit one, and build the shell for the second and outfit it when the need arose. Less than a year later, Gosford Hospital moved operations into the second lab as well.

“We are able to offer patients procedures that most of the local hospitals cannot do, like neurosurgery and defibrillator implantations,” Matt commented. “With our recently expanded facilities, we’re able to offer the community more of what
they need out of their healthcare. Our drive is to provide acute care for the Central Coast community. Patients should not have to travel great distances from their families and friends during these times.”

Also a part of the multi-million dollar redevelopment project was an ICU and a ninth operating theatre, and future plans include a 10th and 11th operation theatre, an expansion of its day surgery services, and 32 more beds.

“Healthe Care Australia has been pivotal to Gosford Private’s growth and  supportive of the hospital throughout its transitions,” Matt said. “I’m looking forward to us meeting our 2020 growth and hitting another 35 years in operation.”

As the largest private hospital on the Central Coast, Gosford Private boasts:

The hospital employs more than 500 staff and hosts more than 200 credentialed Doctors in a range of specialties, all committed to the delivery of exceptional patient experiences and care.

With two co-located major medical centres, a radiology practice and pathology laboratory, our complex offers a health precinct second to none. 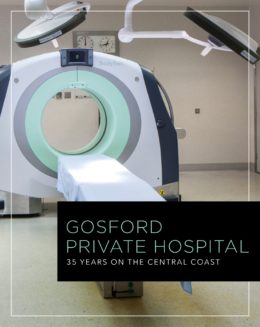 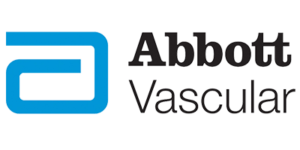